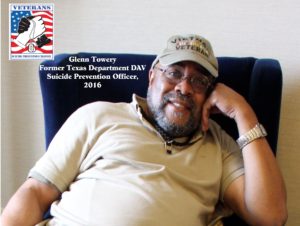 Due to pressure from the department of Texas Executive Committee his appointment was rescinded without comment less than a month later, but not before Glenn had fulfilled his obligation and wrote out the plan of operation for the DAV “National Suicide Prevention Program that could be adopted by the 5 or 6 largest Veterans Service Organizations in America, the VFW, AMERICAN LEGION, AMVETS, DAV, Military Order Of The Purple Heart and NABVETS. Resolutions for the program are presently in committee for the Texas Department of the VFW and the Texas Department of the American Legion. 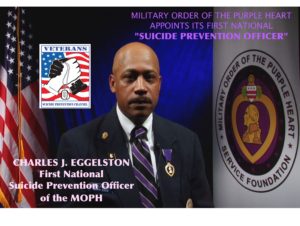 An SPO Program like the plan that Glenn Towery authored was also being thought about by a member of the Military Order of the Purple Heart Charles Eggleston. It was the outreach of Mr. Wilbert Forbes, VSPChannel board of directors member and former deputy director of the Department of Veterans Affairs of the state of Maryland, that made Eggleston aware of the Towery SPO Program and plan. After reviewing the VSPChannel plan the MOPH leadership was also made aware. A resolution was authored for the plan at the MOPH by Towery. The advocacy of Mr. Forbes and this resolution and plan led to the appointment of Mr. Charles Eggleston as the first National Suicide Prevention Awareness Officer in American history of the Military Order of the Purple Heart organization and created a partnership between the two that continues to blossom everyday. The MOPH adopted portions of Towery’s plan combined with their own and is in the process of instituting their suicide Prevention, Intervention and Awareness program, for their members nationwide.

Recently the national NABVETS organization (http://nabvets.org/) adopted the SPO Plan Program after voting to adopt a Towery resolution for the creation of an SPO Program in their organization.

The SPO Program plan is a simple one. Provide Suicide Prevention and Intervention techniques to the members of these prospective organizations and create, local, state department and national reporting to determine the size and the scope of the suicide incidents in each of their prospective organization. The plan is free. Glenn has never asked for any financial consideration for adopting and using this plan whole or in part. Below is the SPO Plan & Program created for national VSO’s by Glenn Towery. If you like it ask your organization about adopting it today: